Difference between hood and chimney (Which is better?)
MENUMENU
MENUMENU 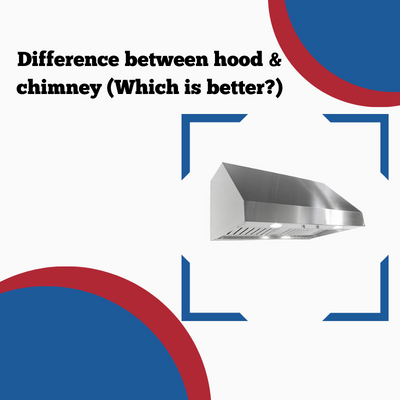 Difference between hood and chimney (Which is better?)

The next issue that may be plaguing you if you have already decided to install a kitchen chimney is what chimney design to pick for your kitchen. Choosing between a stainless steel chimney Hood and a straight one. In our post below, we will go over a few elements that influence people’s preferences for certain types. Let’s first examine the two categories and how a stainless steel chimney hood differs from a straight line chimney.

It  is also made mostly of stainless steel, toughened glass, etc., which increases its durability and longevity. These do not, however, come without a few drawbacks of their own. These can be more expensive than a straight line chimney because they are higher on the price scale. Additionally, installing a hood chimney takes up more room, so compact kitchens might not be a good fit.

A Straight Line Chimney: What Is It?

A straight line chimney is one that has a straight design and does not include a chimney hood. If you want to maximize your available space and hide your kitchen chimney from view. The greatest option in the situation is a straight-line chimney. These are more typical designs that place more emphasis on functionality than on appearance.

Without spending a lot of money, a straight line chimney may complete all of your chimney’s tasks, such as removing grease and odors and circulating the air. Straight line chimneys now come with modern features like bi-rotational technology, intelligent controls & safety precautions that improve the function of the chimney. These have fewer design options, though, so they might not work with your kitchen’s decor.

Overall, straight line chimneys are the best option if you want a simple chimney with good cleaning performance.

Buying a Hood or a Straight Line Chimney: Things to Consider

Now that we are aware of what hood chimneys and straight line chimneys are, we can learn about certain variables that need to be taken into account before choosing one of the two options for commercial kitchen chimneys.

Your kitchen’s interior design is another important consideration when deciding between a hood and a straight line chimney. A chic hood chimney can substantially improve the aesthetics of a kitchen in today’s society where people place a lot of emphasis on kitchen design. A hood chimney is therefore your best option if your goal is to improve the appearance of your kitchen. It offers you more design, colour, finish, and other options than a straight-line chimney might.

Your budget is crucial when purchasing any technological device. If money is the only issue, we advise choosing a straight line chimney. These chimneys typically cost between 5,000 and 15,000 rupees. A good hood chimney, however, can run you anywhere from 15,000 to 20,000 rupees. While you may save money without sacrificing performance by purchasing a superb straight line chimney for less than 15,000 rupees .

The volume and length of time the chimney needs to ventilate the air in the kitchen are used to determine the chimney’s performance. In addition, the amount of heat buildup and kitchen area are factors.

A hood chimney operates more effectively than a straight-line chimney. It quickly ventilates the air, thanks to stainless steel chimney Hood blowers. Additionally, it has a strong suction power.

The Indian cooking approach can be used with either a hood chimney or a straight chimney. Depending on your needs and requirements, you can select any of the two varieties. To make a better informed decision, it’s also crucial to consider the brand and its track record of success.

Which chimney is best for indian kitchen?

Difference between hood and chimney (Which is better?)

How to pick your perfect burner stove

How to find best kitchen equipment supplier for your restaurant